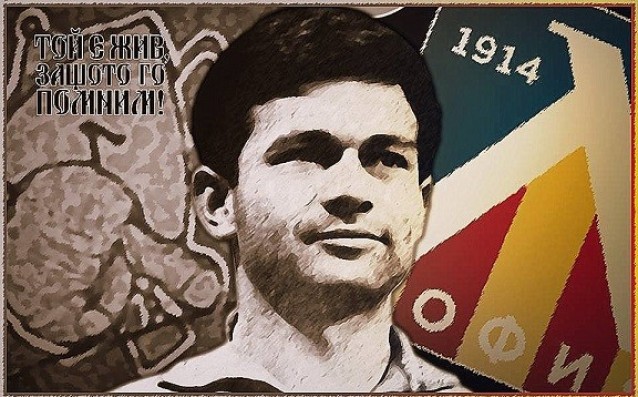 Good day, to all of you who like and enjoy my place. I called it place, because here I feel comfortable to share all my dreams and thoughts with you. To speak loud and free for everything, to be me in 120 %. Today post will be about a great man, a player, father, husband and an angel. Yes, he was an angel,soon you will understand why.

My grandfather told me once, bad man cannot smile in a shiny , childish manner, like everything he is doing is the great gift from God. You all know in what times we live. Times of bad people, thieves, layers , killers, double-faced, people who only cherish money and power. People , who are all dark even when they are smiling….

Now when I am posting these lines I am in a mood from shy smile to tears trying to drop down on the keyboard. The same feeling I had , while I was writing the post about Karlovo and Vasil Levski in my other blog. There are such humans , idols, legends which come for a short time and makes everything to look simple, they show you the way and then God takes them back to himself. Are they angels, I will leave this decision to you ….

One of these angles is Georgi Asparuhov – GUndi. The man who was chosen for the best Bulgarian football player for the past 100 years. The man in whom all the women and girls were in love. The humble boy , who had a jump like Michael Jordan ( Gundi trained for several years volleyball). Hero of the blue public and the maestro with the ball. He had the smile, which can melt any bad heart or strong eyes. As my grandfather told me, he was never brutal, aggressive, even he did not have may yellow cards in his career. But the defenders where very brutal and rough with him, that is why he was having injuries all the time of his short career. He was wanted in many movies in Bulgaria, to take part in. He was a light in the tunnel  of bad and bloody communist times…. He was and he is a star  , that shows us the way and teach us how to be better humans . Why do I believe that he was a fallen angel among us:

The points are seven as a reminder of that great 7-2 against our enemy, which is not existing anymore. Three goals of Gundi and amazing play of all the members of Levski at that game. I know Gundi is watching us from somewhere  , he is smiling , he is happy or sad , but mostly he is with his friends- the other angles ( including NIkola Kotkov). He had only 28 years to show  what his mission was, but he left so much love , as he was living for 280 years. Now I am also crying, because I love Gundi, I love Levski and our love is stronger  then any hatred of other teams. I am positive that miracles happen and angels come, when he have strong belief and faith. I do believe that soon we will have and produce such talent. Only Levski and Gundi is immortal, I guess he liked my post and he is smiling back to me from somewhere above, all we know that this place is called – heaven...