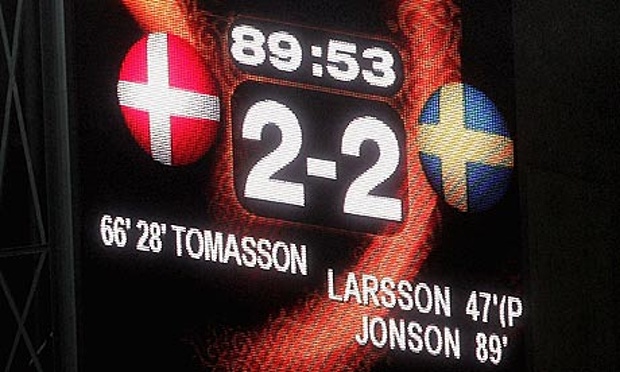 Good morning, for some of you maybe it is not still morning, but the sun in my room told me to start writing, before it was too late. This week is not rich for a sport-football events as the Euro 2016 , Playoffs (knock out stages) will be played. As you had seen on the picture, I will be speaking and giving predictions about Sweden and Denmark first leg game on Saturday in Stockholm.

This game and the result 2-2 was one, that  Giovani Trapatoni the former trainer of squadra adzurra, told the both teams will make before the game , in order Italy not not to go ahead from the group stages ( Euro 2004 in Portugal). I am not that aware , if the match was deliberately made for this score to end, but the facts does not lye. I am not here to blame anyone, I am here to discuss and write about football. The main reason , that I put this picture on my post, is that me , you , all of the fans of both teams want to see many goals , not rude plays and press all around the field. Football is a game of goals ….

I respect both teams very much and I will tell you why. The Bulgarian national team, unfortunately was badly beaten by both squads, but I can not cross my heart and tell that they are not countries, who produce very good and essential football talents : Laudrup brothers, Peter Schmeichel and his son nowadays – Casper, Dani Agger (one of the best defenders in the world),Morten Olsen , Nicklas Bendtner and many others. On the other side we have names and stars like : Thomas Ravelli ( amazing goal keeper and good friend of Stoichkov) , Henrik Larsson( a true magician with the ball, a man who had  scored from any positions, no matter with any leg or with a head, there were no secrets for him in the game of magnificence), Fredrik Ljungberg ( another master of the pass and incredible shots from middle distance), Marthin Dahlin ( one really intelligent player in and out of the pitch) and the most brilliant player in Europe and World nowadays – Zlatan Ibrahimovic. His name on Slavic languages, mine also and in Serbian , means the Golden one 🙂  All these players, please forgive me if I miss someone, but this can always can happen, it is not deliberately done, they gave a lot to us – fans.

Now it is time to see and check what my betting partner and odds provider – William Hill has brought to our attention as bettors  and punters, searching for the value not only around the corner . First of all , I think that Sweden will win with 2-1 or 2-0 as a final result. In the last 5 games, Sweden had lost 4 times and commit a draw result in the 5th ( 0-0) against Denmark. The time and place are on the side of the “three crowns “. Zlatan will definitely score, he is a man able to do genius things with the ball and on Saturday he will show his great class. Let’s focus on the outcomes and winning markets with the correct odds, provided by W. Hill :

You may say , that I do not give a big chance for the visiting team of Denmark, but I think that the home squad will be more motivated to take a big win, also they will be determined to take a comfortable result, as there will be second match in Denmark. In games with high intense and pressure, Ibrahimovic shows the very best of him. You all remember the hat trick scored against England.

I wish you a remarkable day to have from now on. Pockets full of winnings  and value bets. Also , one advise from me- smile to the world and the world will smile back to you 🙂