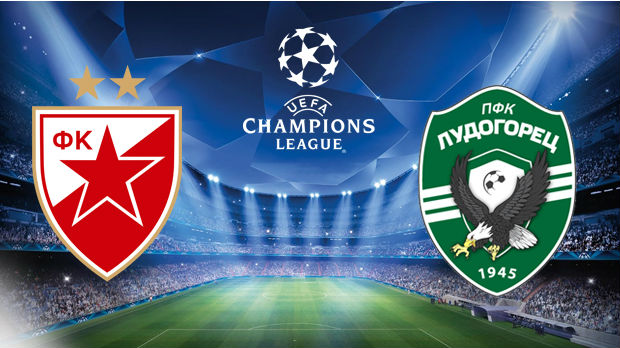 Good day  , dear friends. Yesterday night we saw several nice games from the Champions League elimination round, one phase before the true games for entering the Group stage. One of them was the match between Crvena Zvezda – Ludogoretz. A game that had everything in it.

First game in Razgrad ended 2-2 and no one convinced the visiting squad to be the winner after the second game, which has been expected to be played against 50 000 fanatic fans of the Serbian team. Mala Marakana expected this game for a days now. Even some of the home team Ultras went in front of the hotel of the Bulgarians and flamed piro effect, which was very cowardice and mousy thing to do. They wanted to scared the “eagles”, but …..

I am actually fan of Levski Sofia, this is my team and this is where my heart belongs to. Levski are in crisis, not capable to overcome Maribor from Slovenia after two draw games. But we are here today to speak about Ludogoretz. I am not quite sure how many people have believed in a miracle in Serbia to happen last night. The results from previous game had put Serbians as favorite, because of their crazy and devoted fans. If you want to pass to the next level , you will be needing a result like 3-3 or to win by a goal difference. No Bulgarian team has been achieved this in the previous match-ups in such phases in Euro Football Competitions. But traditions are always to be broken in some way and in some time ….

Most of us, you, me , fans, people who regularly visit the stadiums, they are there for the game to see passion, suspense and many goals. All of you perfectly know what is the feeling , when your favorite teams scores, scores and early opener and you start to scream and sing and all the crowd is totally mad, full delirium… This is is what happened yesterday night, Zvezda scored the first goal, and this was it… Vlado Stoyanov made a mistake after the long shot, but he is human. I respect that man a lot, he saved a penalty from Ronaldo , not only for his team- Ludogoretz , but also in friendly game we played and we had won against Portugal , earlier this year. He is not just a goal keeper, he is a hero and great motivator. He had no chance to save the penalty for the equalizer 2-2 at the beginning of the second half, but he did many brilliant saves ever after.

Bulgarian team, played the game in the best technical and pragmatical way. The players of  Ludogoretz waited patiently to hit the opponent in fast and killing counter-attacks. This was how the 2 goals in the extra time were scored. There is one man  , who made the miracle a fact and a story to tell in the upcoming months. He is a Brazilain and his name is Wanderson. He scored 3 goals and killed the intrigue in extra time. He is very fast and I thin many good games, and many goals are up front to come…

I have to say good words for Zvezda players , they also played good game. It is one of the best games,   I have seen recently. We are proud of you Bulgrian heroes, not because you are passing the next round, it is because of the critics , you had. All which did not believe in the final win, are not very happy and dream big, maybe we will see againn Real Madrid or Barcelona in Sofia, only Fortune can tell us.