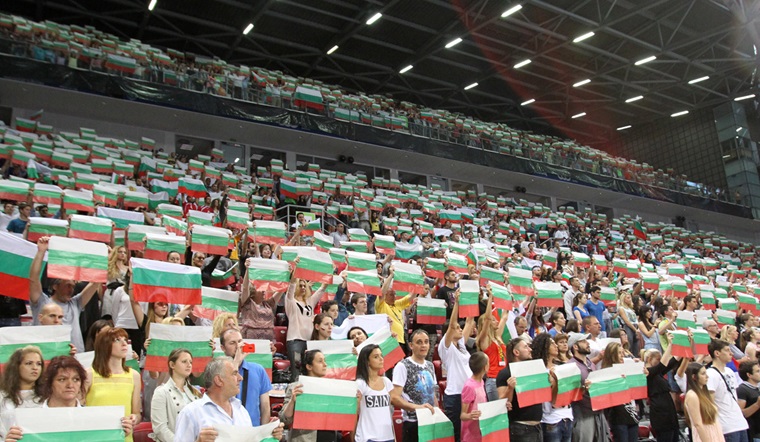 These days in Sofia is held the European Championship in volleyball. This tourney is held in two countries Bulgaria and Italy. Many games have been played and on Saturday there will be semifinal games : Slovenia –Italy and Bulgaria– France.

Today I am here to write about Bulgarian National team in volleyball. Man of honor, these are the first words I am able to say after the long night of celebration after the winning game against Germany, won yesterday night with 3-0 score. It was one of the best game, I have ever seen . There was fight and sweat, if it was another sport, maybe there would have been blood  and tears on the play ground.

Both very motivated teams had appeared on the pitch , to play in front of over 13.5 k exalted fans in the Armeec Arena, Sofia.  The atmosphere around the hall and in the capital of Bulgaria, few hours before the games start was like in a boiling pot, like a volcano  who is about to explode any minute. If you had been a visitor of my beautiful city, you might have seen a sea, an ocean of Bulgarian national flags and many happy men and women singing the songs of victory.

Both teams have met in the preliminary stage of this tourney in Group A. It was the first match in the group and Bulgarian lions had won again with result 3-0. Great result in the first game, which was followed by 2 victories against Czech Republic and Netherlands with result 3-2.

Yesterday game was a great clash between two very smart and ambitious trainers – Plamen Konstantinov and Vital Heynen. The last one was penalized with a 80 000 Eur fine, because he said the German team deliberately lost the first game on order to face again Bulgarians and to go through the semifinals easily. But what exactly had happened:

Dear friends, I wish you all to  live that emotion. It does not matter if it is on volleyball, basketball or football. The sport has one great quality – to unite people and to give them power for great things, if you wish innovations. Support your national team and believe. When you believe in your boys, they become not only soldiers but the bravest warriors.